The famous Lebanese-Armenian musician, composer and pianist will be visiting Greece for the first time on Monday, November 11, 2019, at 19:30, for a one-off live concert at the Stavros Niarchos Foundation Cultural Center (SNFCC).

For the first time in Greece, AM Management & Productions presents, for a single concert on Monday, November 11, 2019, at 19:30, at the Stavros Niarchos Foundation Cultural Center (SNFCC), the “Nomad of Music” Guy Manoukian –as he has been dubbed by the international media, since for him each song is a new journey reflecting his roots. With him, Antonis Remos will make a guest appearance on stage, in a musical meeting that will surely make waves, as it is expected to create even stronger bonds between the two countries that have been deeply connected with a close friendship for years.

The famous Lebanese-Armenian musician, composer and pianist has been active in the international music industry for the past 20 years. He has collaborated with some of the biggest names in the US, such as Wyclef Jean, and always stands out for his unique compositions based on a combination of oriental and contemporary melodies.

His art enjoys a widespread appeal, having distinct influences from both East and West, always paying tribute to his Lebanese and Armenian heritage. With his melodies inextricably linked to his roots, he has traveled around the world performing at sold-out concerts in London, Paris, Singapore, Cairo, Dubai, Kuwait, Abu Dhabi, New York, Los Angeles, Armenia’s Yerevan, the Sydney Opera House, Toronto, Sri Lanka and he has participated in many international festivals around the world. “I have appeared everywhere from Sydney and Chile to Cairo and Los Angeles. The way audiences react to my music is an emotion transcending words”, he has mentioned in an interview.

Even though Guy Manoukian realized at a very young age that music was his true calling, he did not expect to become the first Middle Eastern brand ambassador for Yamaha pianos. Having been mentored by some of the best classical music teachers, he began playing the piano at the age of four, his first appearance on television being at the age of six, while he was merely seven years old when he gave his first public performance. A year later, at the age of eight, he began composing his own music, winning his first competition.

His array of international fans includes Salma Hayek and Queen Rania of Jordan, as well as members of the famous Kardashian family.

For more information about Guy Manoukian’s concert at the SNFCC and ticket reservations: https://www.viva.gr/tickets/music/ethniki-lyriki-skini/guy-manoukian-live-in-athens/ 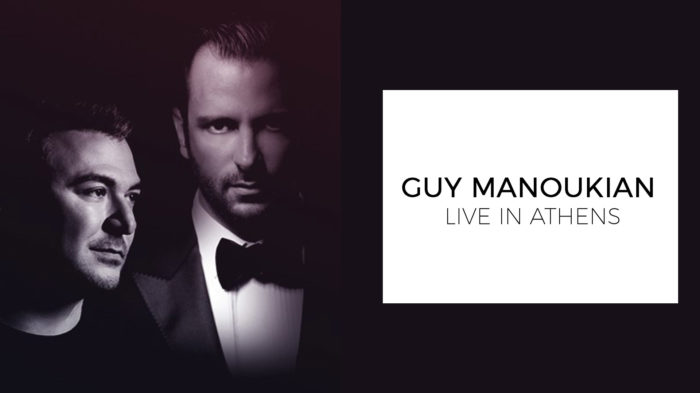